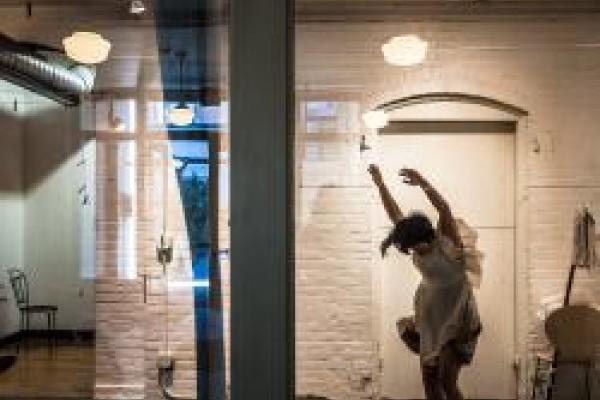 Dahlia Nayar, Margaret Sunghe Paek, and composer Loren Kiyoshi Dempster collaborate in a sound and movement excavation of the artists’ own cultural hybridity, investigating the transfer and loss of meaning between generations pre and post immigration. The work adapts as it migrates to various spaces (a studio, a theater, a gallery, a community grange, a Buddhist church) inviting audiences to a makeshift “home” of initially recognizable domestic objects and daily tasks that become reinvented through layers of movement, multilingual electronic soundscapes, and live cello. Ultimately, 2125 Stanley Street aims to invite the audience into a home that unfolds through movement, sound and intimate exchange, a home that is both familiar and yet cannot exactly be located.

This performance of 2125 Stanley Street is made possible by generous donations from the Arts Initiative at Ohio State and by the New England Foundation for the Arts’ National Dance Project, with lead funding from the Doris Duke Charitable Foundation and The Andrew W. Mellon Foundation. It is presented in conjunction with the Dance Studies Association conference, Transmissions and Traces: Rendering Dance, hosted by the Ohio State Department of Dance, October 19–22, 2017.

2125 Stanley Street was created with the support of creative residencies with the Vermont Performance Lab and the Bates Dance Festival Emerging Choreographer residency and is funded in part by the New England Foundation of the Arts' National Dance Project Special Projects Grant, and the National Dance Project Touring Award with lead funding from the Doris Duke Charitable Foundation.

For more information about the artists: http://dahlianayar.com/home.html

For more information about the conference: http://sdhscordconference.org/

Photo above by Kelly Fletcher