This scholarship fund is always growing its endowment, providing more students with more meaningful support every year. Please consider making a gift.  Click on the fund number above to enter the University's secure online giving website. 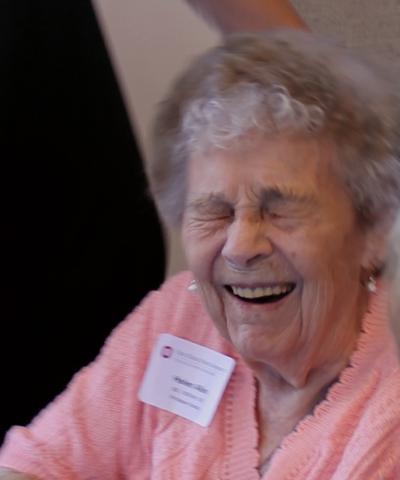 Helen P. Alkire began the dance program at Ohio State over forty years ago and remained chairperson until 1983.

Helen passed away on November 14th, 2015 in her home on the Alkire farm in Orient, Ohio.

Her many honors and accolades include participating in planning the first American College Dance Festival Association (ACDFA) National Festival at the Kennedy Center, serving on the National Educational Testing Service panel for Scholars in the Arts, serving as the Vice President of the ACDFA (1980) and Treasurer of Council of Dance Administrators (CODA) (1979-80), receiving the Plaudit Award from the NDA (1980), and the Educator's Award from the Greater Columbus Arts Council and the Association of Ohio Dance Companies. She was one of the founding members of the National Association of Schools of Dance (NASD), and an original member of the NASD Commission on Accreditation.

Her other credits include the production and direction of several dance films. As an administrator, she instituted and developed several degree programs in dance at Ohio State. In June 1990 Alkire was awarded the Honorary Degree, Doctor of Education from OSU. The degree was awarded in recognition of her outstanding achievements and the importance of her contributions to the field of dance in higher education.

Donations to the Helen P. Alkire Scholarship Fund are most welcome.