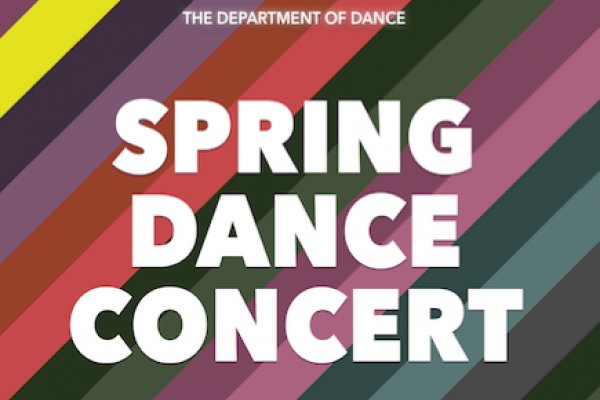 Reserving tickets in advance is highly recommended as seating is limited.

OSU Dance presents its 2016 Spring Concert featuring work by guest artist Eddie Taketa, and the BFA completion projects of two graduating seniors, Cailin Manning and Serena Chang.  Eight other works by undergraduate and graduate choreographers round out the program. A wide range of students, from first year BFAs to MFAs, will be performing over the course of four performances beginning Thursday, April 6th and concluding Saturday, April 8th in the Barnett Theatre in Sullivant Hall, 1813 N. High Street, Columbus, Ohio.

Works featured include the following:

Eddie Taketa, guest artist, brings a collaborative process to the creation of his new group piece fashioning a unique work based on a complex sketch generated by his group of twelve dancers.

Serena Chang (BFA ‘16) presents her senior project piece Our Hour, an exploration of the cancer community through the collaboration of herself, nine dancers, and three people diagnosed with the disease. Movement has been generated based on their communal experiences in rehearsal and the choreographer’s knowledge about the genetics of the disease, creating an abstract non-narrative view into the components of cancer.

Cailin Manning’s (BFA ‘16) piece is the culmination of her senior choreographic research looking at dance through an anthropological lens. As complex human beings, we initiate movement for reasons other than survival, and the physical evolution of our bodies in correspondence to our intellectual advancement allows us to utilize these physical differences in creative and evocative ways.

Julia Ayau (BFA ‘17) piece presents a sense of curious, playful whimsy as the three dancers vaguely embody fairy book like characters who find themselves together by chance but move easily with one another as kindred spirits.

April Biggs (MFA’18)Through acts of physical rigor, this work explores the intimacies of will and adaptation, idiosyncrasy within harmony, of a relationship reaching for equality.

Nicole Garlando (MFA ‘17) and Biag Gaongen (MFA ‘18) present Nicole & me; Biag and me in which they allow the idea of no memory and no imagination to be their creative force and re-recognize the reason of doing. Maybe not today…

Lilianna Kane’s (BFA ‘17) Revel in 2 explores how movement and presentation unites two bodies physically in space, and visibly in the eyes of the viewer.  By exposing the bodies' potential for similarity and difference, this work aims to portray two dancing bodies that have more in common than culture tells us.

Heidi Murr’s (BFA ‘17) piece investigates the relationship between three dancers through proximity and the juxtaposition of movement and music. The contrast of unison and opposition of the dancers informs their presence as individuals within the group. Fragmented music highlights the continuous flow of impending movement throughout the piece, creating an atmospheric tugging and pulling with an underlying groove.

Kylee C. Smith (BFA ‘17) presents her second major choreographic work Nou Led, Nou La. Translated from Haitian Creole, the title means "We are ugly, but we are here." This dance seeks to explore and the presence, or lack thereof, of Black dancing bodies within dance historically and affirms that while we may not fit the predetermined mold, we are here.

Anna Vomacka’s (BFA ‘17) piece explores the physicalization of both self and socially imposed labels on the individual. With the use of live sound composition, she aims to create a snapshot glimpse into the lived and personal histories of each of her performers with the hope of creating a humanizing response to their individual experiences.

Kimberly Wilczak (MA ‘17) presents Central Park A Plexus of People and Place, a hybrid dance-design piece that seeks to hold both the land and park visitors in a recreational, performative experience. At the core of this work, 4 dancers engaged in design activities at Knowlton School of Architecture’s studios and in New York City’s Central Park. While the dancers normally work at human-scale in the dance studio, in this process they explored space for movement at scales (eg. 1” = 200’) where a human figure would stand less than 1/8" tall.