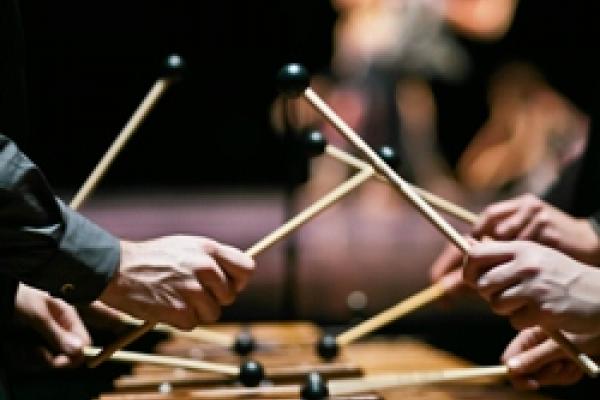 The program for this year’s Drums Downtown proved very different from years past. Previously, the program consisted of a diverse array of composers and styles of musical compositions. This year, however, the OSU Percussion Ensemble had the opportunity to develop an entire concert of work composed by one of the most recognized American composers in the minimalist movement in music, Steve Reich. This distinction not only altered how the Percussion Ensemble prepared for performance, it also changed the way the Department of Dance collaborated. Dance became part of the performance of one of Reich’s most monumental pieces, Drumming. The piece is comprised of four parts which included the use of small bongos, marimbas, and glockenspiels. Choreographers Meghan Durham-Wall, Bebe Miller, and Susan Hadley, created pieces to Part II, III and IV of Drumming. The juxtaposition of each of these works within the same musical arrangement brought a distinct perspective to each section.

During Part II of Drumming, movement is introduced by the choreography of Meghan Durham-Wall. Throughout the process of development, the cast and choreographer reflected upon and gave special attention to their piece as an introduction of dance to the music of Steve Reich. The creation of this dance was intended to ease the audience into seeing movement in relation to the patterns of musical development in Part I. The dance developed from an examination of landscape, terrain and texture and was embodied in the quality and structure of movement. The whole dance acted as a journey traveled and experienced by the cast of performers collectively. Images of canyons, mountains and coasts remained important throughout the choreographic process through the final performance.
As the dancers began working with live music, the ensemble strove to develop and solidify the flow and pulse inside their own dance as its own entity before relating back to the rhythms and shifts in the music. Dancers rode the flow of the music without constantly embodying it. The formation of a single line across the stage was revisited as a constant reminder of the simple rhythmic base from which both the music and dance developed. This unifying moment allowed for groups of dancers to move into phrasing and partnering, creating relationships between dancers in a way that would foster the presence of community and trust on stage. There was a strong understanding of how each section of movement related and connected to the next and how every section and grouping played a role in the progression of the dance.

The fourth and final movement of Drumming was choreographed by Susan Hadley, and brought all the instruments of previous sections together. The development of this section of dance was meant to reflect Reich’s process as well as the musical structure of this section.
The piece began with the ensemble moving slowly and sustained as a group. Small groups of dancers alternate into sequences of accented movement. The entire piece moves from moments of balance and unison into moments of frenzy and chaos, mirroring the music into a concert of complex layers. The nature of movement shifts from balanced and easy to energetic and lively. The formation of dancers in space shifts from stable and stationary to scattered and interwoven.
The transformation of patterns and systems overlapped seamlessly so that the viewer had time to process each pattern before the next one developed. The bond between the performers was invisible yet strong, appearing calm and assured. As the piece continued to build, the dancers had to rely on each other. Experience practicing with musicians was vital, allowing the dancers to build trust and community on stage. The dancers had to develop a strong confidence in one another, and with such a reliance on the music the ensemble also had to work to develop a trust with the musicians.
The strong bond developed throughout the entire performance ensemble allowed for a powerful, satisfying and stunning conclusion.
– Jessica Boone

Ashley Williams, a Junior BM Percussion Performance Major, had the goal of “being solid for the dancers” when she played in the percussion ensemble for The School of Music’s annual production of Drums Downtown. “When drumming, we were very focused on our jobs... and do[ing] justice to the piece for Mr. Reich,” said Williams. Reich’s music consisted of constant harmonies, steady pulse, gradual transformations, and reiterations of musical phrases. Professor Bebe Miller choreographed movements threading their way through Reich’s intricate music, giving the audience a visual representation of what their ears were hearing. Percussive movements were juxtaposed over intricate rhythms. Black tunics rustled, moved by flowing gestures and acrobatic movements, and then swayed to a halt; only to start again. These moments of stillness were compelling not only because of the sudden change in movement, but also because of the countenance of the dancers that gave no indication of what was to come. Said Williams: “Playing for the dance pieces, and especially getting to see the ending result was eye-opening. What we each do separately is beautiful in and of ourselves, but when combined, it is breathtaking.” Drums Downtown was a great experience for all involved, including Williams and many other members of the percussion ensemble.
– Crystal Irvin
Share on Social Media