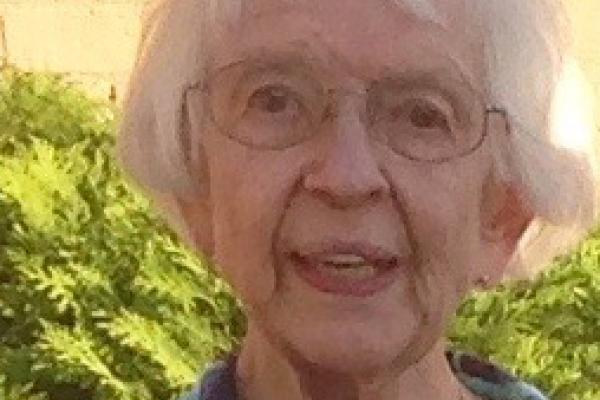 This week, The Ohio State University Department of Dance is celebrating Professor Emerita Lucy Venable, who turns 90 on November 28. We’re also taking this time to reflect on Lucy's legacy at OSU Dance, and her work shaping the department’s principles and expertise in documentation.

Lucy Venable graduated with a BA from Wellesley College as a Spanish major and spent twenty years in New York City where she studied dance, primarily with José Limón, Doris Humphrey, Margaret Craske and Alfredo Corvino. During this time, she became certified by the Dance Notation Bureau as a Labanotation teacher and Labanotator, and taught Labanotation and Limón technique at the Juilliard School and Connecticut College Summer School of Dance. Lucy performed with the José Limón Company (1957-1963), touring in the United States, Europe, Central and South America, and the Far East. For five years, she was rehearsal director for the Merry-Go-Rounders, a dance company that performed for children. From 1961-1967 she directed the Dance Notation Bureau (DNB) in New York City.

In 1968, she came to The Ohio State University where she taught dance fundamentals, Labanotation, repertory and Alexander Technique. She founded the Dance Notation Bureau Extension for Education and Research, and was its director for 12 years. While at Ohio State, Lucy worked closely with fellow professor Odette Blum, establishing one of the department’s foundational principles to center on dance documentation and Labanotation. Lucy also collaborated with George Karl and Scott Sutherland on the development of the software program LabanWriter, a project she now continues with David Ralley. She serves as Vice President of the International Council of Kinetography Laban (ICKL), on the Board of Directors of the Dance Notation Bureau, and continues to teach the Alexander Technique.

Lucy played a critical role in establishing Ohio State as an expert in dance notation, and through her work, helped to preserve the history of modern dance so that we can continue to bring it alive in the present. Her legacy continues to have a lasting impact on our department, and today we thank her for her invaluable contributions and continued years of support. Happy birthday, Lucy!