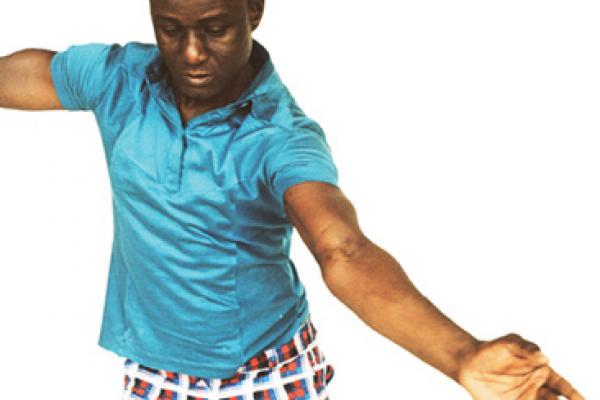 Souleymane ‘Solo’ Badolo is a Brooklyn-based choreographer and dancer born in Ouagadougou, Burkina Faso.  He visits OSU Dance on Friday April 8th to teach masterclasses in technique and composition. Additionally he will share his creative research.

Solo Badolo started his professional career as a dancer for the DAMA, a traditional African dance company. In 1993, he founded his own Burkina Faso-based troupe, Kongo Ba Téria, which fuses traditional African dances with western contemporary dance and continues to tour internationally. Mr. Badolo has danced with world-renowned contemporary African dance company Salia ni Seydou, worked with French choreographers Elsa Wolliaston and Mathilde Monnier, and performed with the National Ballet of Burkina. He and Kongo Ba Téria are featured in the widely-screened documentary Movement (R)evolution Africa which documents the continent’s emergent experimental dance scene.

Since moving to New York City in 2009, Badolo has created a number of solo projects commissioned and presented by Danspace, New York Live Arts, Dance New Amsterdam, Harlem Stage, the 92nd Street Y, the Museum of Art & Design, and the sprawling River to River Festival (R2R). He has collaborated with Nora Chipaumire, Ralph Lemon, Reggie Wilson, and Jawole Willa Jo Zollar of Urban Bush Women. His ongoing research in Africa has been supported by The Suitcase Fund of New York Live Arts.

Mr. Badolo was nominated for a 2011 New York Dance & Performance (Bessie) Award as Outstanding Emerging Choreographer and in 2012, received the Juried Bessie Award (from jurists Lar Lubovitch, Yvonne Rainer and Jawole Willa Jo Zollar). In summer 2013, he was named Artist-In-Residence at the Institute for Curatorial Practice and Performance at Wesleyan University and Mount Tremper Arts. Badolo was commissioned to create a dance for Philadanco as part of James Brown: Get on the Good Foot, produced by The Apollo Theater for presentation there in October 2013, followed by national and international touring dates.

Mr. Badolo is a participant in the Extended Life cohort of the Lower Manhattan Cultural Council (LMCC) and the recipient of Wesleyan University’s 2014 Mariam McGlone Emerging Choreographer Award. He graduated from Bennington College with an MFA in June 2013. Since that time, he has been a guest instructor at The New School and Bennington College. Mr. Badolo was selected to be the Harkness Foundation Artist-in-Residence at the BAM Fisher for summer 2015 and was commissioned by BAM to create Yimbégré, an evening-length work for presentation in the 2015 Next Wave Festival.