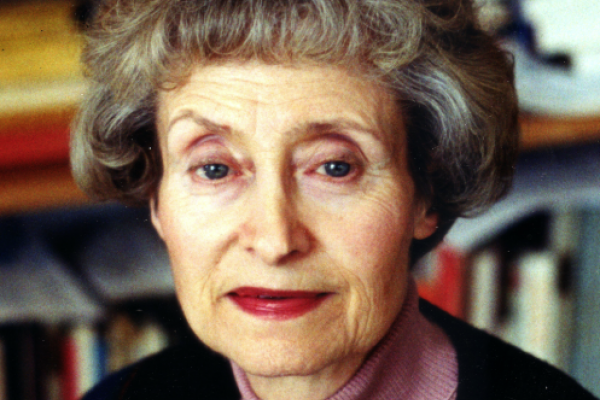 Many have expressed condolences and shared their appreciation for Professor Emeritus Dr Vera Maletic. The collection of kind words follows:

“I was just talking about her with my dance history class.” - Jessica Lindberg Coxe

“What a great individual she was - a brilliant dance scholar and such a gracious, beautiful human being.” - Diance McIntyre

“I was deeply saddened to learn of the passing of Vera.  I vividly remember sharing a room with Vera at a conference and waking up to see her meditating every morning.  I can still see her playful smile from many meetings, and remember her many interesting movement analysis ideas.  I know she will be missed in many circles.” -Judy Van Zile (ICKL Fellow)

“There are precious memories of Vera, from when she first came to New York and the DNB. She enrolled in my Jazz Dance Classes, and she was acknowledged as the most gorgeous woman ever to grace the studio. During an ICKL Conference in Paris, she accompanied me to a Jazz Club, where some American jazz musicians were performing. She was fun to be with, and a valuable contributor to the Laban work.” - Billie Mahoney (ICKL Fellow)

“I had some wonderful days with Vera and she will be missed by a lot of us notation folk.” - Ray Cook

“I share your grief for the loss of this graceful spirit.” - Jimmyle Listenbee

“There have been so many lovely responses, how she would have loved to hear them, but perhaps they are reaching her over the air waves.” – Ann Hutchinson Guest

“She was so kind - I was so surprised to know quite after some years of meeting her the first time that she was deeply involved in the system and a close relation with the great personalities around it. I am really sorry for her passing.” - János Fügedi

“Will miss her presence and wisdom.” – Tara Stepenberg

“I am so very sorry to hear this sad news.  My thoughts are with you and everyone in the Dance Department.   She was an amazing woman…and will always be remembered …” - Lisa Naugle, Ph.D. Chair and Professor Dance Department, University of California, Irvine

“The Dance Notation Bureau acknowledges with deep sympathy the passing of a long time member and friend, Vera Maletic.  Vera will always be remembered for her contribution to the world of dance and her deep support and preserving of Labanotation.  Our prayers and thoughts go out to her family and friends as we too, will miss her.” – Doris Caravaglia

“ I will always have fond memories of her.” – Ligia Pinheiro

“We will all miss her in our hearts. May she continue her beautiful work and blessing presence in the misterious gardens where dance is eternal.” –Ciane Fernandes, Professor at the Graduate Program of Performing Arts, Federal University of Bahia, Brazil

“I was a member of staff and colleague of Dr Janet Goodridge and Vera Maletic at the Laban Studio in Addlestone in the late 1960’s. Janet has just told me about Vera. The news came as a shock because she had remained in my memory from those days, always looking vibrant and attractive. The vision and sound of her voice will remain with me always.  I could never think of her as ageing.  The days spent teaching Music there were for me very special.” – Yvonne Clarke

“In 1954-1955 Vera and I  were students together in  Addlestone, near Weybridge, Surrey, at  what was then variously called or known as The Art of Movement Studio,  Laban’s Art of Movement  Studio,  or The Art of Movement Centre. Everyone working or studying there certainly very much appreciated Vera’s presence. Vera was already a well-trained dancer. She  had received a fine introduction to Laban studies from her Mother, Ana Maletic (who had known Laban well, and studied with him). At the Studio, my memory is that Vera’s main focus was on pursuing her interest in Laban studies - especially with the opportunity to meet  Laban himself. But she did participate in a range of  other classes too.  I recall she joined the small group of us where, thanks to a fellow student who enthusiastically shared his expertise, we learned the basics of African hand-drumming technique in an informal weekly evening session!  Vera’s purpose and focus at that time was far distant from Yugoslav folk dance, and although she had fine knowledge and repertoire, “my” group was initially frustrated in our enthusiastic attempt to get her to share some of this with us….. However, when the Summer term began, we were delighted when it was announced that as part of our course, Vera was to introduce us to Yugoslav folk dance! A final memory from those days is of Vera’s truly excellent, most patient teaching.  And it was successful too: our performance of one of the line dances  (the trickiest for us!) was selected to curve its way around the space for a well received  performance at the  annual  end of year Studio Open Day!  It was a most welcome surprise when we found ourselves together again as teaching colleagues at the Studio in the 1960s. I will always remain grateful for Vera’s unfailing support and encouragement both professionally and personally. Vera Maletic  – May you rest in peace…….”  - Janet Goodridge

“I will very much miss the Vera I worked with, learned from and enjoyed as a mentor and influential personage of elegance and sophistication and wry humor.  I thought of her as mysterious and other-worldly, but also no-nonsense and down-to-earth.  At some point over the years, I began to realize she actually respected and liked me—this suspicion gave me great pleasure because she was a woman of discernment and integrity.  Because the through-line of her life was her interest and devotion to all things Laban, including her beloved mother’s school in Croatia, it was intimidating when I decided to complete the course in LMA shortly after joining the faculty at OSU.  I was aware Vera looked askance at the American wing of Laban studies, but over the years we came to realize we had virtually identical perspectives and understandings.  I was greatly influenced by her superior knowledge, and the privilege of working with Vera carried me way beyond the LMA certification program.  I would love the chance to bring what I learned from Vera to the community where I have moved. Beyond my gratefulness for the professional Vera, I have so many memories of her through her colorful and often quirky phrases.  I offer a few to you today: Before every class she taught, she had the students get in a circle, hold hands and do a simple folk step, accompanied by a chant with the accent on the first syllable “RU-dolf LA-ban WAS his NAME!” Often when I asked her about something that seemed in variance to what I had learned, she would say, “but Melanie, I learned from the HORSE’S MOUTH!” During a session where she had me perform scales based on her mother’s teachings, I was not cutting the mustard and she let me know it.  When I started to get visibly discouraged, she said “Oh don’t let my Eastern European harshness get to you!”  Vera: you were never harsh, blunt maybe, but not harsh. She liked calling my husband Gil “ebullient” – I could tell she was proud of that adjective. I see her making a certain gesture: raising her eyebrows and shrugging with a little smile of slightly sardonic resignation. I remember her in her movement: Light, indirect and then precise, mostly bound, but occasionally and suddenly free. It seems as we age, we realize more and more how precious are the figures who populated our world stage and are no longer there.  Like everyone gathered here, I am so happy to have known a woman as fascinating, funny, brave, and smart as Vera Maletic.” – Melanie Bales

Click here to watch a video excerpt feature on her from Peter W Richard's MFA Thesis project of 2006: LEGACY / Helen Alkire and the Department of Dance at The Ohio State University.

Click here to read her obituary in the Columbus Dispatch.

A celebration for Vera was held on Sunday November 22nd.
Share on Social Media